A Week of Volunteering

At the start of the year, I thought I'd give a taster of the first full week of my New Year

Monday:
Go to Cuerden Valley Park (CVP) for staff meeting. Short walk round the lake for a survey of birds. There were a few long tailed tits, a sparrowhawk, 12 goosanders, some siskins, a treecreeper and 7 mallards. Bird feeders were then filled and sightings entered to database.
Home for lunch and started a free on-line course from FutureLearn on "Sustainability". This one is delivered by Nottingham University 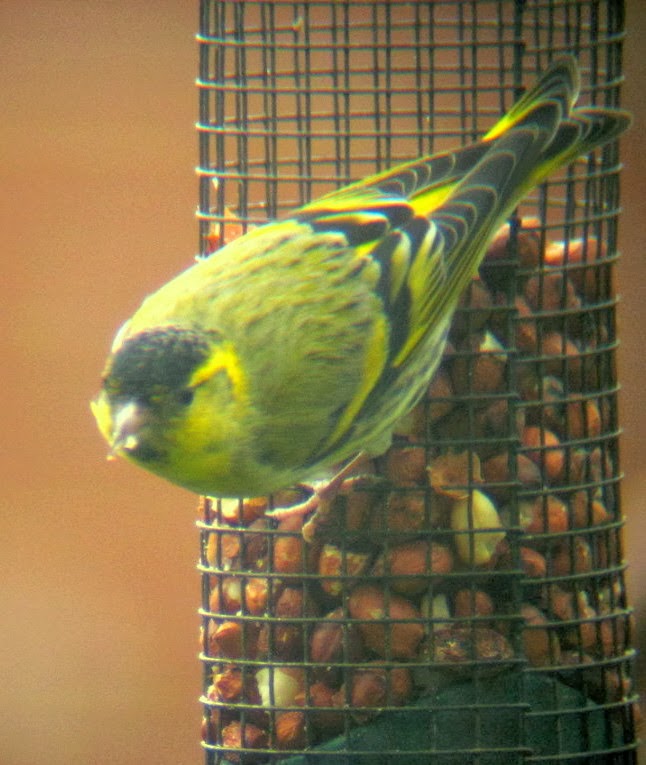 In the evening I went to listen to an excellent talk by John Poland on " Rare Plants in Britain" There were only two of these that I have seen; Lady's Slipper Orchid and Yellow Whitlowgrass. It also gave me the opportunity to ask David Earle, BSBI recorder for vc59 South Lancs, about botanical records in Chorley.

Tuesday:
Another visit to CVP where the Park manager took me to an area where he showed me a few elm tree. Last summer we had a sighting of 16 White Letter Hairstreak butterflies and I wanted to search for the eggs. Jan/Feb is the best time, but not today as I had another appointment. The regular Health Walk, normally held each Thursday was having an extra day on a Tuesday to see whether there was any support. I helped lead this, which lasts for about an hour. As you can see from the picture, they were not put off by the rain. I of course also point out any wildlife interest. We had more goosanders, Canada geese, great crested grebe, nuthatch, a tree-creeper, grey wagtail and we saw butterbur starting to emerge near the wooden footbridge. This was completed by lunch so the afternoon was another time to spend on the Sustainability course. 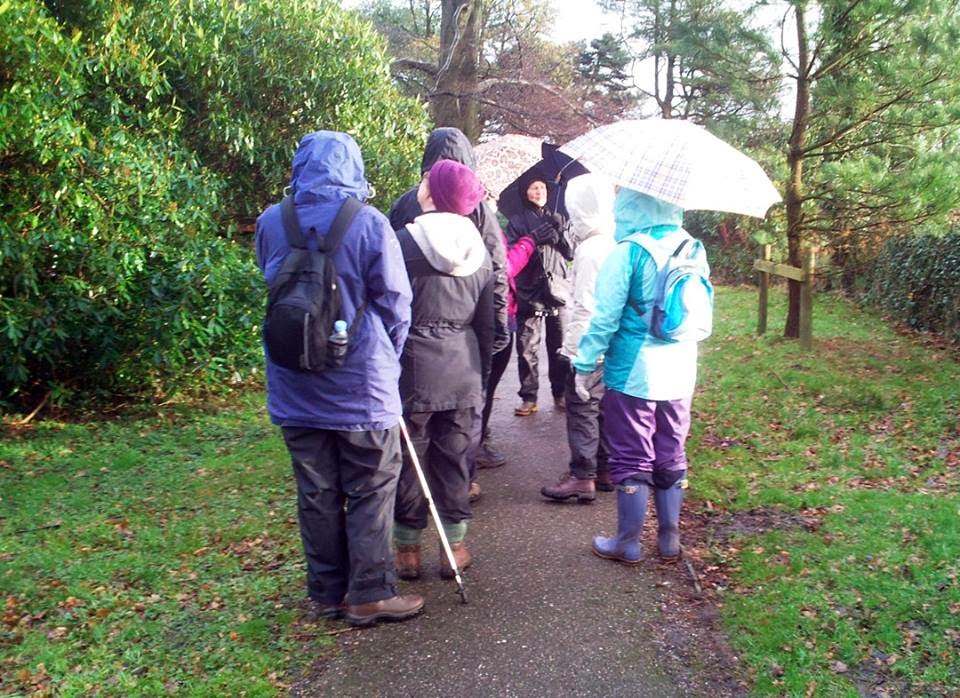 Wednesday:
In the morning I went to Lancashire Wildlife Trust's Brockholes reserve to lead a walk for the Preston U3A Birdwatching group. There were about a dozen of us. A couple of buzzards circled above as the group were gathering and we were disappointed that a great white egret had flown away just fifteen minutes earlier. We had an hour and a half looking at both Meadow Lake and also the romantically named No1 Pit. Grey Heron, Mute swans, tufted ducks, mallard, shoveler, cormorant and the ubiquitous coot were noted at the first area. Viewing over the second lake we added snipe, great crested grebe, gadwall, goldeneye, several gulls and moorhen. In the hedgrow nearby we saw chaffinches, robins, great and blue tits, blackbird, two very confiding meadow pipits and several tree sparrows. Lunchtime as usual arrived too quickly so then group departed for a warming bowl of soup.
As I left I heard that the great white egret had been seen near the River Ribble which was on the way to my home. I called in and found two birders who had recently seen the bird. After about a fifteen minute wait I saw it fly. Even better it was flying towards us. I didn't get a photo, so this one is one from Bill Aspin, one of the birders I was with. 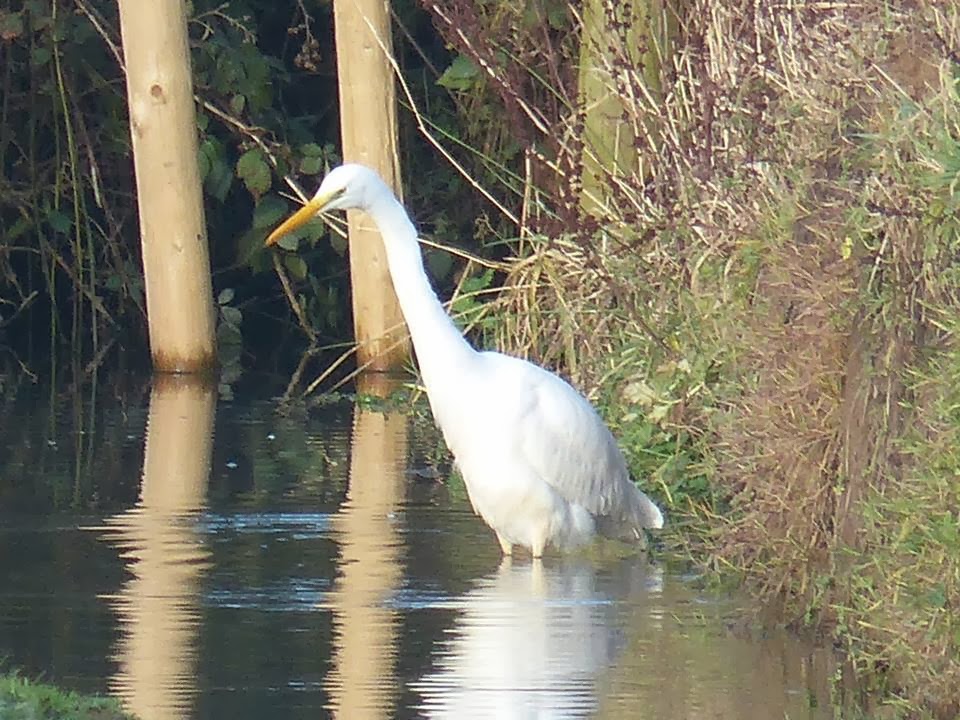 I was home by 2.30pm so again enough time for a rest and refreshment. The evening was occupied with attending the Committee of the Lancashire Badger Group, where I am vice chair.

Thursday:
This was chill-out day, but I did about an hour looking at my Sustainability online course. I also received an email asking for help tomorrow at the Preston Guild Wheel. An ecologist was asking for help searching for newts in a short section at the north east part of the cycle path. The Guild Wheel is a 21 mile "greenway" that encircles the city of Preston. Created as a lasting legacy for the 2012 Preston Guild it is both a walking and cycle route. Users of the Wheel experience the variety of landscapes that surround the city.

Friday:
I was having breakfast before going to help at the Guild Wheel when I received a text from Brockholes. "Bittern seen near the Visitor Village 0810". I had to pass there on my way to the newt hunt so I set off early to get about 40 minutes twitching done. The bird disappeared 5 minutes before I arrived and re-appeared 2 minutes after I left. Ah well there will be other opportunities.
Our search for newts was to ensure that none were hibernating in the area. This meant that improvement to the Cycle Path could go ahead. There were about 16 of us under the supervision of an ecologist. The task involved searching under tufts of vegetation, mainly on our knees. Thank goodness we were all adequately dressed for Lancashire weather. There seemed to be enough mud for a hippo to wallow in. We didn't find any newts but we did find, snails, some vole burrows, groundsel in flower, hazel nuts, a few plastic bags and a fluffy die. An early finish meant I was able to return home in time to prepare for my eldest great grandson's seventh birthday.
Saturday:
I was planning on doing a morning birding but unexpected rain forced me to start laundry instead. I still went to CVP to refill the bird feeders.


Sunday:
In the morning I went to my local church, which meets in a converted shoe factory. It's a time when I can have a good sing, learn more about Jesus and enjoy time with my church family. This morning we were reminding ourselves of belonging and community 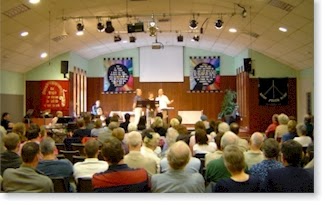 After lunch, I was back at Brockholes leading the weekly Sunday afternoon reserve walk. It was a cool slightly breezy afternoon. The highlights were, goldeneyes, gadwall, scarlet elf cup and King Alfred's Cakes. A quick dash home for a meal and then catch the train to Southall in London for the A Rocha UK staff meeting.

More Hats than a Milliner

twintal
Green follower of Jesus. I am involved in recording as many different species as I can. I use iRecord to do this so that all taxon groups are sent to the correct database.